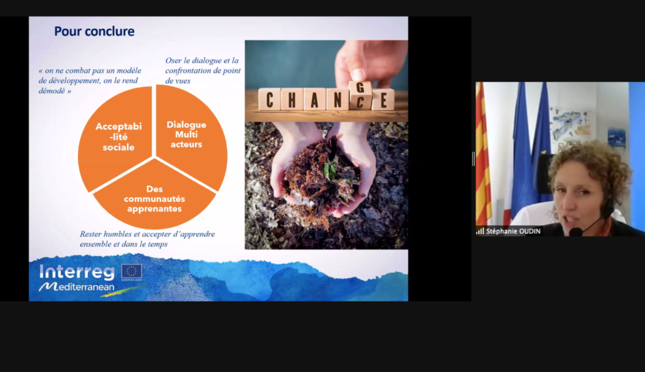 On 16th of March 2021, POSBEMED2 Project held an online event on « Beaches erosion and Posidonia banquette preservation : what are the main issues in Provence-Alpes-Côtes d’Azur ? ».

Organised around four main themes, building knowledge, changing management practices, raising stakeholders awareness and defining coastline management strategies, the online event offered attendees a variety of experiences on addressing this biodiversity conservation issue. The CPMR-IMC, as an associated partner and a monitoring partner of the project in the frame of the Mediterranean Biodiversity Protection Community, attended the online meeting to collect the main presented outputs and to follow the exchanges of experiences.

Climate change has become a political issue of prime importance, resulting in increased efforts to combat rising sea levels and coastal erosion. Posidonia banquette and its role in slowing coastal erosion is now at the forefront of research.

In Sud (Provence-Alpes-Côtes d’Azur) Region, human activity has had an impact on the natural dynamic of rivers and their sedimental intake. The aim of this web-event was to aggregate knowledge on coastline, in order to promote a coordinated conservation approach between local, regional and national authorities.

To do so,  experiments are currently taking place on the coastline of the Sud region. One of the methods tested is photogrammetry, taking very precise measures of the movement of the coastline in order to draw a cartographic synthesis of seagrass beds. Pebble tracing is also being tested, focusing rather on sedimental abrasion’s effect on coastline. Several stakeholders, aware of the issue of Posidonia banquette preservation and coastline erosions put different initiatives forth to collect data and make it available to the public. The CEREMA developed the « Rivage » application, reuniting data collected by all coastline users updated in real time, while the platform « Mon Littoral », supported by the DREAL PACA and CRIGE PACA, aims at developing a sustainable management of the Sud Region coastline. This collaborative tool brings together different stakeholders and enables sharing information (gathering information on the coastline, exchanging experience, identifying good practices to facilitate decision-making for coastal decision-makers). This initiative echoes the work done by the French Ministry of Ecological Transition on the GeoLittoral portal, which disseminate data, produced in the framework on public policies on French maritime and coastal areas, and explaining these policies. The National network of Coastline observatories is also building up a broad network of actors in the French territories, underlining the prime importance of building knowledge and increase sharing among stakeholders for an improved sustainable management of maritime and coastal areas.

- the multi-layers technique, consisting in re-spreading Posidonia and covering with sand. It represents a good compromise between costs management / limiting nuisance for users and is being tested in Sud Region.

- in Sardinia, the MAREGOT project is experimenting following coastline movement through implementing photo-surveillance systems, simple of use and at low costs.

- in Balearic Islands, the Posidonia Life Project, is implementing the special decree for the conversation of Posidonia aiming at promoting a sustainable management of beaches and banquettes while encouraging tourism uses. The regional authority as well as local authorities are in charge of such management. Two features define the project : the removal of banquette during the touristic season and its reinstalment by the end of it, and the interdiction of commercial use of banquette, a condition favourable to traditional uses (livestock and construction uses).

- A new management tool was also presented, the « Eco-attitude » campaign used the « nudge technic ». Nudge occurs when an individual makes the decision to respect the rules or not, this new approach  belongs to the corpus of behavioural economics and sciences. Nudge brings information to the brain very quickly to make it easier for people to make environmentally friendly choices, by providing key messages which encourages the respect of rules.

At last, it was also the opportunity to present further the POSBEMED 2 project, which aims at changing practices, raise awareness, and reunite stakeholders regarding Posidonia preservation and coastal and maritime areas. POSBEMED 2 introduced the 10 actions aiming at developing : the creation of a Think Tank to improve transition feasibility, monitor pilot beaches, create communication and awareness tools, lead education activities and include users and economical actors as well as holding a Region Conference. Other activities to be implemented in the near future consist in trainings for technicians and decision-makers, provide an Engagement Charter, organise a Meeting with Mediterranean stakeholders in order to perpetuate a network of involved actors and a « plages de caractères/natural beaches of character ». Sud Region presented a synthetised spirit of the POSBEMED 2 project through these powerful words : « Let’s aim at making Mediterranean tourism development unique, let us be proud of our specificities and change our tourism model ».